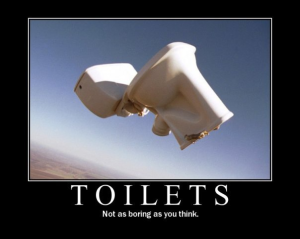 “The toilet’s leaking again!” Making the sighing noise I reserve for these occasions, I grabbed my plumbing gear and, after several action packed minutes, the leak swiftly turned into a flood.

At the hardware store I found a flustered mob of amateur plumbers wandering up and down the toilet aisle clutching a variety of crud encrusted items. It was my time to shine!

During the next hour I helped several people locate the parts they needed to fix their dunnies and led an old lady to the gardening section to get a backflow valve. I was happy to help, plus it gave me something to do until an actual assistant arrived to serve me, because the bit I needed wasn’t on the shelves; again.

An assistant eventually appeared, and after staring at the empty spot where my part should have been, toddled off to search the storeroom, make phone calls or possibly read a novel.

Meanwhile, I showed an anxious couple with a dripping shower, how to use a tap reseating kit on a nearby bathroom display. They were extremely grateful, but I did make a bit of a mess of the showroom taps.

The sales assistant re-appeared, looking suspiciously refreshed, and informed me that they didn’t have my part. So instead of a lousy three dollar washer, I ended up buying an entire toilet cistern.

After many hours of swearing (and mopping) I got it sorted. Three days later, while I was debating if it was safe enough to start licking my fingers again, I was informed the hot water system had turned into a geyser.

Driving back to the hardware store I wondered how I could become the ‘Finder’ of these problems and not the ‘Fixer’; I suspect that it would require some major changes to my plumbing.