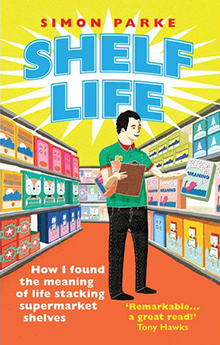 What does a vicar do when he no longer wants to be a vicar?  He works in a London supermarket; apparently.

Shelf Life has been a surprisingly enjoyable account of Simons’ time behind the till, the fruit and veg shelf and the bakery.

His recounts his dealings with the public, including running down and catching two shoplifters.  His friendships with his fellow staff members and battles with management will raise a smile from anyone who has endured a workplace full of slightly different folk.  Shelf Life is full of small, but important, life lessons Simon learned to apply during this period of his life.

Chiefly, I think he learned patience…

Greg Bray didn't come from Gladstone, and moved away from the place forever in his twenties then came back and settled down. He is occasionally surprised to discover he's over 50, still enjoying riding his battery powered pushbike 'Pubtruck III' and getting a buzz from writing and publishing blog posts. He is a huge fan of Bill Bryson, Terry Pratchett, Douglas Adams, Tolkien, Alain de Botton and countless other writers who have made him chuckle (or think) over the years (although he does feel a bit guilty for owning a couple of Jeremy Clarkson books). One day he hopes to bring joy to others through his own scribblings.
View all posts by Greg Bray →
This entry was posted in Currently Reading and tagged Shelf Life, Simon Parke. Bookmark the permalink.