Getting To Grips on Handshakes 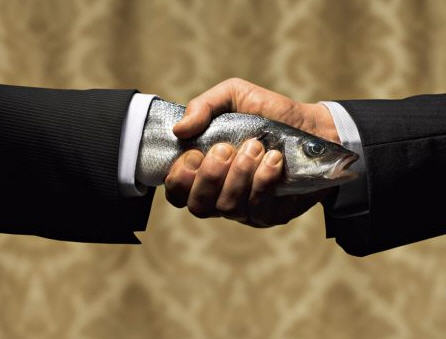 Folks, you can tell a lot about a man from his handshake; and from a woman too, especially if she’s got more callouses than you.

And there are basically four types of handshake:

The Dead Fish – limp and listless.

The Firm and Friendly.

The Pumper – where someone tries to dislocate your elbow or shoulder. And finally,

The Crusher – the preferred handshake of inconsiderate idiots, and sadists.

There are varying grades of each, including the Two-Hander and the Controller (trying to pull or push you away), but most fellas are Firm and Friendlies. Plus, they’re usually aware that the firmness must be slightly softened when being introduced to ladies, the young, elderly or highly infectious.

As a lad, I frequently had my right hand crushed to a pulp by men who weren’t being cruel (mostly) they were used to hard labour and really didn’t know their own strength.

But, not long after turning fifteen, I recall meeting Australia’s own Jerry Lee Lewis, the piano playing rocker, Jade Hurley. As I was being introduced to him, I recall thinking, ‘His hands are his living, so take it easy.’

Frankly, Jade didn’t have too much to worry about from a skinny kid with arms like jockey’s whips; but the thought was there.

As we shook hands, Jade smiled that big cheesy grin of his and boomed, “Like a man boy, shake hands like a man!”  My father, standing next to me, must have wondered why I’d gone all Dead Fish with the ivory tickling rocker.

I wanted to crawl into the nearest hole and die, but chose instead to simply turn red and squeak, “Ok.”

It was a lesson I’d never forget, and years later, I reckon I’ve got a pretty good grip on it.