Whale of a Tale 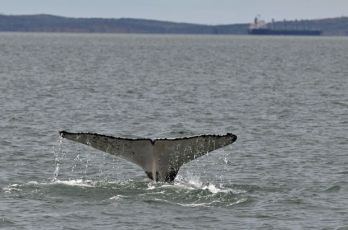 There is a connection between these two photos…. trust me.

Folks, I can clearly recall the day back in high school when my mate Errol trumped our gangs’ ‘one that got away’ fishing lies stories with this statement: “My dad was standing on Auckland Point lookout and reckons he saw a killer whale!” he announced.

There was a moments’ silence before we pelted him half-eaten Vegemite sandwiches. Oh, how we laughed! When the dust finally settled, I loudly scoffed, “Mate, there’s no way your dad saw a killer whale, or any other whale, in Gladstone Harbour! You’d have more chance of finding a packet of pineapple flavoured potato chips in our tuckshop!”

Look, I was a cocky teenager at the time, which meant I knew pretty much everything about anything; except how to cure my pimples or approach and talk to girls I was keen on.

Since then I’ve learned, through bitter experience mostly, just how little I know about most things. So, while I’m delighted to see snapshots of happy humpbacks hauling themselves into our harbours’ habitat, and hope like hell I’ll get to see one leaping about, part of me cringes in shame as I recall taunting my mate all those years ago.

Now, I still haven’t officially apologised to Errol, but in my defence, there’s been no actual killer whale sightings… yet. But I can guarantee it’s only a matter of time though before an orca pops up in our harbour, because last night I saw an internet ad for pineapple flavoured potato chips.