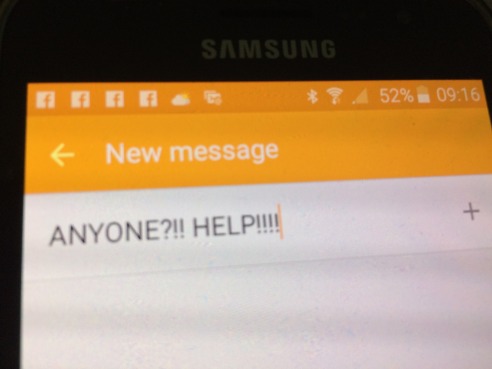 Folks, my phone has abandonment issues. Apparently, I’m ignoring it when working, driving or while someone is talking to me.

I suppose it’s only a matter of time before it’s starts sending our desperate texts for a new owner.

Initially we got on like a house on fire, but I grew bored with it. It turns out there really was a limit to how much bad news, whinging, ignorance or fake outrage I could take.

So, I started reusing my original boredom buster – Mi-Brain.

Mi-Brain is a rich, fantasy playground right between my ears. It’s free, easy to upgrade and the battery life is amazing.

On the downside, Mi-Brain’s memory is a bit full, bog slow, often forgets important data, recalls seriously dodgy facts or figures and regularly throws up embarrassing memories. Like the time I… no, not today.

But, for a rapidly growing number of people, it appears Mi-Brain isn’t an option, as they’d prefer to keep checking their phones every couple of minutes like overfed chooks pecking at an electronic seed feeder.

Not to worry, because programmers have come up with several apps to encourage phone addicts to spend less time pawing at their screens and more time in ‘Reality World’.

Think about that: we can now download apps onto our phones to help us spend less time on our phones. Does anyone else think humanity has just found another gear on its’ mad dash towards the cliff’s edge?

Anyway, some apps will blank out your screen after a set time, others celebrate the length of time you spend offline, while another will pop up messages such as, “Stop looking at me!” or “It’s only been a few minutes since you were here?” and “What? Again? Seriously, put me down!”

For those of us of a certain age, we really are a few steps closer to hearing Hal utter those chilling words, “I’m sorry Dave, I can’t do that.”

It’s bad enough these addictive little devices are stealing our time, now they’re telling us when we can use them?