Short story: I can walk a 42 kilometre marathon and not end up in hospital.

Long story: It was an 8 hour 11 minute long adventure with so many great memories, I’m still trying to process it all.

Enough people turned up throughout the day that I only walked one lap out of 26 on my own, which was entirely unexpected.

There were times when there was a couple of us, or a small tribe.  There were so many great conversations, sprinkled with jokes and the odd jibe, which helped soak up the miles, and several times I was surprised at how some of the ‘older folk’ kept up a cracking pace.

The Final Lap was slow, but a lot of fun.

Early in the day… looking and feeling good.

David Kingston on his unicycle… one of many wonderful people who turned up on the day and brightened my walk.

I was genuinely touched by everyone who made an appearance, joined me on the track or chipped in to help out.   Particularly my parents who gave up their day to man the donation station and slip me water and a sandwich occasionally.

Even with a few stops (toilet and drink breaks, several photo opportunities and a small delay while we waited for a passing snake to cross the path) the average speed was approximately 5 kph.  Not my best pace, but comfortable enough to ensure I wasn’t out there until after dark, plus it was much easier on the body too. 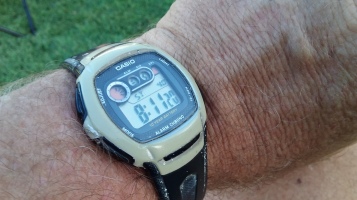 The last lap was super special as I was joined by my family and a few friends.  We slowed things down so Mum and Dad could keep up, had a lot of laughs and took many more photos.

It was pretty magical crossing the line for the final time with my tribe cheering and clapping on each side of the path.

The one question I was asked afterwards (and several times during the day) was:  ‘Are you doing this again next year for your birthday?’

To be honest, I was simply grateful to get through this years’ event.

The real question is, ‘Do I really want to do a marathon every year?’

Hey, I’m glad I did it, but perhaps it’s time for the next challenge.

Possibly a swimming event.  Because, every time I moseyed around to the marina side of Spinnaker Park I thought, ‘I wonder if I could swim across that pond?’

When I was joined by the young lads from Roseberry House, I half jokingly put it to them if they would be keen to join me one day for a swim across the marina.  Four out of five wanted to do straight away.

I love the energy of young people, especially those have no idea of what they can’t do yet!

Together, we raised over half a thousand dollars which will go to two great local charities: The Mission to Seafarers and Roseberry House.

I got to tick an item of my imaginary bucket list and I’m much fitter and thinner than I was a year ago.

Plus, finishing this mini-challenge has given my confidence a pretty big boost.

You know, if I can do that, then, well, you never know what else I might be capable of.